Sport Fishing for snapper in Costa Rica is a wonderful experience. There is a probability of fishing a snapper around every corner of the country from north to south, Pacific and Atlantic.

As the most novice and advanced anglers know there are many varieties of snapper out in the ocean. Costa Rica is host to more than 50, most of which can be fished on foot from the beach or near mangrove and river mouths. Inshore trolling and deep sea jigging are other very successful ways for snapper fishing in Costa Rica. 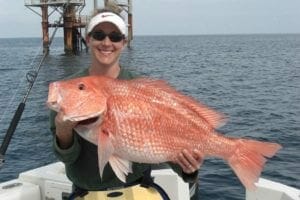 Big Snapper fishing from shore in Costa Rica
Snapper fishing in Costa Rica is best at early hours in the morning and later in the afternoon.
These toothed monsters are restless hunters and fiercely territorial, and that’s why almost any lure or bait passed near their caves and hideouts fall victim to their immense jaws and pointy teeth.

If you want to catch a BIG snapper, a mean-red-fighting machine, your best bet is a deep sea jigging and inshore trolling session around multiple structures in the Southern Pacific, near Sierpe and northern Guanacaste, where the big monster still resides and are cached regularly.

Medium and occasional big snapper are caught as bycatch when inshore fishing for other species like snook and mackerel, most of the time falling victims to medium diving lipped plugs and baits.

Snapper is also a top predator around inland mangrove estuaries and river canals in the central and south Pacific. Sierpe and Terraba are known for the mighty snapper fished close to the mangrove line, good eats with a beer and a dish of patacones at the end of a hard day.