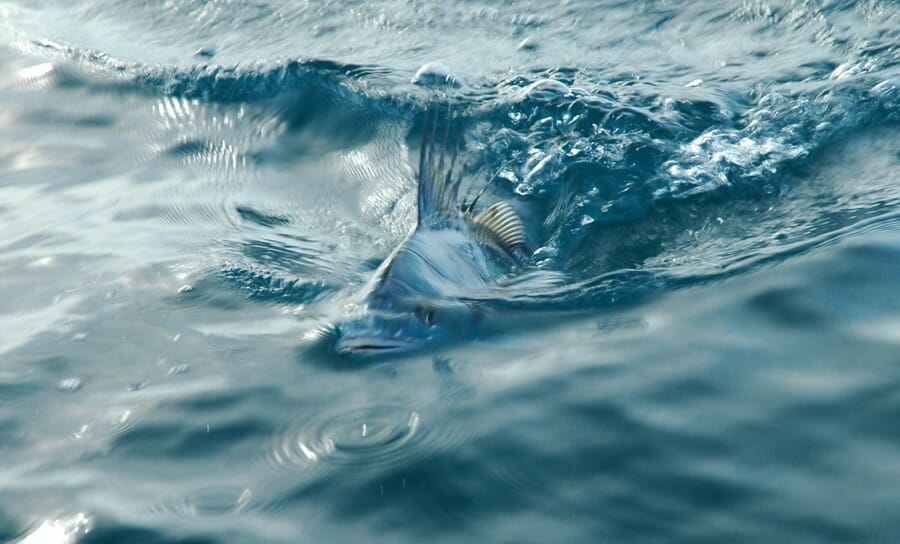 Nematistus pectoralis, roosterfish or roosterfish is a powerful swimmer and a very interesting fish to look at, before, during and after a fight. Its crest-like dorsal fins many time gives out the visual alarm of their attack.

Roosterfishing in Costa Rica is mostly surface action, but there are exceptions!
Most rooster fishing guides usually use some sort of bait/artificial surface rig pulled at medium-high speed, that really entices roosterfish to attack. With their dorsal fins elevated above the water, it is a very powerful experience to see these predators attack a lure, sometimes repeatedly, until they are hooked on and the fight begins.

Nematistius pectoralis can also be fished for near rock outcroppings and in surf action areas of pacific beaches all along the Costa Rican coast. As with trolling baits/lures, our rooster fishing guides recommend a fast retrieve on a surface lure such as metal spoons, poppers, chuggers and cigar like surface cruisers for the best surfcasting result.

More and more often crews are also reporting rooster fish hooking up on diving lures and metal jigs used for deep sea fishing. Rooster fishing in the pacific south, near Sierpe, can take many forms: from fast paced surface persecutions to line reeling deep hookups of these fast predators. Don’t forget to catch and release!